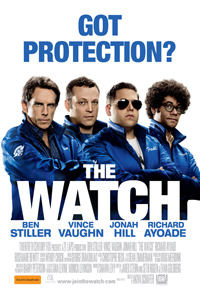 A security guard at a Costco store is murdered, the catalyst for store manager Evan (Ben Stiller) to form a neighbourhood watch group. Recruiting only three other members – Bob (Vince Vaughan), a self-deprecating man desperate to salvage the relationship with his teenage daughter, Franklin (Jonah Hill), a temperamental jokester and Jamarcus (Richard Ayoade), a girl crazy Englishman – they set out to save their town, and the world, from an imminent alien invasion. Obviously.

Looking considerably older, Stiller is the straight-laced guy with little sense of humour, but we’ve seen this so many times before, in the Meet the Parents trilogy, Mystery Men and when he placed ‘himself’ in HBO’s Curb Your Enthusiasm.
There’s nothing new here. The actors themselves are funny guys, but the characters are very tired. The exception is Jamarcus, whose endearing voice alone is enough to get a smile out of the audience, but is quickly ruined by a ridiculous plot turn. With such a line up you would expect the film to be a hell of a lot funnier.

The Watch is one part ‘comedy’, one part sci-fi with a mix of profanity and a dash of gore. One would think that would make a delicious combination, but it falls incredibly short. The sentiment feels phony and while the film is not particularly offensive, it’s just not overly funny. It seems as though the formula equates to one laugh every ten minutes, this isn’t even a memorable laugh and definitely not what you’d expect from a writer such as Seth Rogen, that’s for sure.

There is little charisma with the film’s running time feeling like it’s playing out in dog years. Very disappointing. Don’t watch.

The Watch is in Australian cinemas from September 13 through 20th Century Fox.