If you’ve never heard of the Wushe Incident of 1930, you’re not alone. Set in the lush mountainous region of Taiwan, Warriors of the Rainbow tells the little-known account of how native indigenous tribes banded together to resist the colonial rule of the Japanese Empire despite being vastly outnumbered and outgunned. It sounds promising, but is ultimately a 155 minute drag.

A prelude, set in 1895, shows the ominous Japanese arrival, China having already ceded the reigns. Here we also meet our hero-to-be, Mouna Rudao (as a young man, Da Ching), who as a young man shows his courage in a chance clash between clans while out hunting.

Fastforwarding to 1930, Mouna (now played by Lin Ching-Tai) is still the chief of his clan but the Japanese have attained a strong hold over the region. Japanese is taught to indigenous children in schools, Mouna’s son has joined the Japanese police force and most of the native men are subjected to hard labour for meagre pay. It is clear that their cultures will die out if they don’t take action soon. Realising this, Mouna resolves to go down fighting, in the manner of his ancestors, rather than submit to foreign authority and so follows their fight to the death. 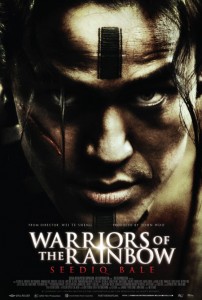 With the theme of clashing civilisations, this resonates with such films as Mel Gibson’s Apocalypto and more closely Edward Zwick ’s The Last Samurai. The Japanese are depicted as your classic bad guys with more machinery than sense, spitting the word “savages” at every opportunity. In contrast, the noble Seediq warriors (as they are called) are courageous and headstrong, cherishing their beliefs and lopping off heads with relish. That said, some of the cultural traditions regarding death may be hard to fathom and people uncomfortable with mass suicide and decapitation may want to steer clear.

Unfortunately, the laughable bad special effects and surprising traces of humour prevented me from taking this as seriously as I should have at times. That they had to use CGI to create rocks and rainbows didn’t help their cause as the scenery is spectacular enough without. In a subtler movie, you mightn’t care as much but the graphic imagery consumes such a large portion of Warriors that it is hard to avoid.

Director Te-Sheng Wei has deliberately not cast big name actors. And, while the tattooed faces and impressive athleticism are admirably authentic, the lack of acting experience really shows. Lin Ching-Tai as Mouna Rudao scowls for the whole movie and is not the most inspiring leading man. The editing is no better with the final fight battle scene the longest and most tiring I’ve ever seen.

Thankfully cut down from a 270 minute epic for its Australian release, Warriors of the Rainbow may be a landmark achievement in Taiwan but it leaves a lot to be desired.

Warriors of the Rainbow: Seediq Bale is in Australian cinemas from 13 September through China Lion.

Written By
Angus Tonkin
More from Angus Tonkin
It’s so nice to see extras getting into their roles. All too...
Read More