Woody Allen’s offbeat comedy Deconstructing Harry opened to 1997 Venice Film Festival. After failing to get Elliot Gould, Albert Brooks, Dustin Hoffman and Dennis Hopper to play the leading role of Harry Block, Allen took the role himself and played it as only Allen could. Perfectly.

Harry Blocks life is a total mess; he’s a successful novelist who is having trouble defining reality from fantasy and to top it off he has writers block.  All the people in his life, including his former wives, girlfriends and sister recognize exaggerated versions of themselves in his writing and none of them are impressed with him one bit.

The film is told using flashbacks with many different actors playing Harry and his wives at different times in his life.  In Harry’s fictionalized version of events he seems to be somewhat confused about why people hate him so much and why all the women in his life are hysterical and over react to his cheating manipulative ways. 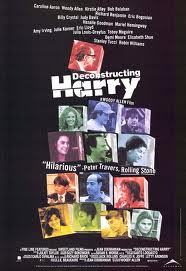 As usual, Allen’s cast is vast ensemble of actors including, Demi Moore, Stanley Tucci, Paul Giamatti, Julia Louis-Dreyfus and Tobey Maguire and Billy Crystal. Crystal is so memorable as Larry that Harry believes “When Larry’s around, I smell burning sulphur’. Crystal also plays the  Devil in an hilarious scene set in Hell towards the end of the film.  Secondly is the performance of Robin Williams as Mel, a small part yet is so crucial for the audience to learn about who Harry really is.  Mel is an actor who is out of focus. Yes, he is literally out of focus, soft and fuzzy but instead of dealing with his fuzzy self he instead forces his family to wear glasses so he looks in focus to them.  There are certainly many lessons Harry must learn from his characters, making other people cater to his way of life instead of changing it for the better is the main one as Mel proves in a strange way.

The sad thing for Harry Block is that he is being honored by the college that kicked him out and after kidnapping his own son, hiring a hooker and having a good friend die from a stroke in the car on the way to the ceremony he is promptly arrested and humiliated on his arrival.

In the midst of all of this are his ex-wives, Joan (Kirstie Alley) and Lucy (Judy Davis) who all seem completely insane and infuriated of their portrayals in his latest novel. All except his ex-lover Faye (Elisabeth Shue) who has fallen for sulphur stinking Larry and they are getting married much to Harry’s absolute disdain.

As always Allen provides us with wonderful memorable lines including, ‘the most beautiful words in the English language is not ‘I love you’ but ‘It’s benign’’ and my personal favourite, ‘All people know the same truth, our lives consist of how we distort it’.  Distort is exactly what Harry does to a point where his character’s become real to him and in a final scene of complete insanity Allen’s fans won’t be disappointed.

Deconstructing Harry takes ‘knowing your characters’ as a writer, to a wonderful new level.

Check out more of our reviews in the Wednesdays with Woody series.