No matter how many ways I look at it, there is just something that isn’t right about Damsels in Distress, the new comedy written and directed by Whit Stillman. It’s just as well Whit has an “h” in his name because here his urbane style of humour doesn’t quite click.

The story follows a group of girls living on campus at the fictional Seven Oaks college. Violet Wister (Greta Gerwig), along with her entourage, the spry Heather (Carrie MacLemore) and killjoy Rose (Megalyn Echikunwoke) run an on campus suicide prevention program. This is just one part of a plan to raise the standards of the entire campus, hygiene and all. Violet’s word is taken as gospel amongst the group and seems to wield a hypnotic influence over them. Although the same cannot be said for the rest of the campus, the great unwashed who “haven’t come to realise their full potential.”

The welcoming of new girl Lily (Analeigh Tipton) into the group challenges the status quo. She is herself battling between feelings for the Frenchman Xavier (Hugo Becker) and the handsome Charlie (Adam Brody) who seems a bit of a player. And, as Violet’s odd theories become clear, Lily is torn between their impeccable logic and her own quiet scepticism. 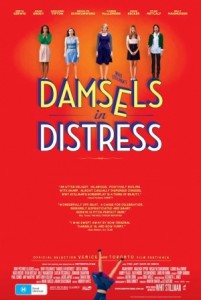 Regardless, there are some genuinely funny moments, Violet having the pick of the best lines. Unfortunately Gerwig’s glazed face and monotonous tone stifle some of the humour but her slightly delusional Violet still has a strange appeal. Tipton, in the other lead role, is decent enough. It is a pity then that the impressionable Lily isn’t really a very interesting person which means the film drifts at stages. That the background characters are little more than cardboard cutouts doesn’t help either.

All in all, Damsels in Distress is an interesting film even if it doesn’t quite gel as well as it should. It left me empty but it is worth a look.

Damsels in Distress will be theatrically released in Australiaon September 6 through Sony Pictures.