Hit & Run is classic B-grade, run-of-the-mill Hollywood comedy. For 100 minutes, you get all the archetype ingredients: fast car chases, gratuitous nudity and Bradley Cooper pissing people off. You get a bit of storyline too, but nothing that will trouble the Oscar committee.

The story follows Charlie Bronson (Dax Shepard), an ex-getaway driver living under a witness protection program, who finds trouble when he foolishly decides to drive his fiancé to Los Angelas for a job interview.

Evidently not afraid of the limelight, writer-co-director (with David Palmer) Shepard positions himself as the lead character in what is an uncharacteristic deadpan role for the comic actor. Shepard is convincing enough in his performance, but he’s rather temperamental and unlikeable for a protagonist.

Kristen Bell is part-adorable, part-pesky partner as the film’s female lead. But the real stars of the film are the pimped-up cars, which cruise down the highways at 130 miles an hour to the sounds of Aerosmith. With the majority of scenes taking place on the road, there’s no denying that Shepard had hormone-fuelled men as his target demographic. 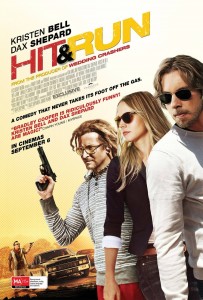 While Hit & Run has the iconic look and feel of a comedy, it seldom delivers laughs. Audiences might chuckle at Tom Arnold’s farcical slapstick or Cooper’s dreadlocked villain. Yet the majority of the film’s gags are either racist or homophobic and simply aren’t funny.

Self-aware of this, the film’s characters hint – during their apparently witty repartee – that such humour is insensitive and shouldn’t be tolerated. They nevertheless persist in stubbornly squeezing cheap laughs from the audience, with little irony intended.

As a romance, Hit & Run is not particularly poignant either. The take-home message has been said and done before and isn’t really uplifting anyway. Moreover, Shepard and Bell only experience brief moments of chemistry, which is surprising given their off-screen relationship.

Indeed, the entire film presents few surprises. The action scenes – while well executed – lack originality. The plot – while entertaining – never steers off in any unlikely directions.

Such a screenplay makes Hit & Run easy to follow; the light entertainment will certainly be enough to appease the average filmgoer. More than anything, however, the film is an excuse to show off fast cars, pitting them against one another in elaborate chases.

Car enthusiasts will probably find the motor eye candy exciting. For everyone else, though, this is probably one film you can survive the Spring without seeing.

Hit & Run is in Australian cinemas from 6 September through Pinnacle Films.