Young mother Kseniya (Svetlana Ivanova) sends her young boy Tyoma (Arytom Fadeev) to stay with his father (Egor Bereov), a peacekeeper stationed in South Ossetia, so she can go on a holiday with her relatively new boyfriend Yegor
(Aleksandr Oleshko). What she doesn’t realise is war is imminent, with her son placed in the crossfire. She decides to make her way from Moscow to the war-torn south, a trip incredibly dangerous and recommended by none, to ensure his
safety.

Going into August Eighth you would never know it was centered around the 2008 Russian/Georgian military conflict. While the film is about this devastating war, it essentially revolves around the bond between a mother and her son, and her determination to protect him no matter what obstacles the hostilities throw at her.

With a grandiose opening scene that could be considered Russia’s answer to Transformers, we see a young boy fighting an evil robot named Dark Lord. Once he is defeated we realise the events just played out are part of the boy’s imagination. As a defence mechanism, he imagines himself in a world of fantasy every time he feels vulnerable or scared, a theme which continues throughout the film. 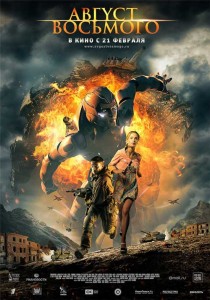 At first Kseniya appears to be a simple young woman, eager to please her controlling boyfriend, but as the film progresses she becomes increasingly likeable, her character morphing into strong and determined to save her son from the clutches of war.

While banned in several former Soviet countries, dismissed as propaganda, as the Russians are largely represented as reluctant participants in war and combat, the film’s moral compass always remains present. The performances are convincing and heartfelt.

This $16 million film is not the kind you see produced in Russia every day. August Eighth feels like a Hollywood film and, especially after the opening scene, you’d be forgiven if you expected the dialogue to be in English. While the dialogue itself leaves a little to be desired, the film certainly looks good and holds audience attention, despite its two hour running time.

August Eighth is playing as part of the Russian Resurrection Film Festival. Further information can be found here.