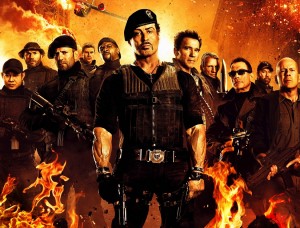 From the moment the thunderous musical score comes into full swing with the entry of the titular characters into the first of many ridiculously over blown action sequences in The Expendables 2, you know exactly what you’re in for: a loud, explosive and over the top trip down nostalgia lane. The best part of the trip though, and what the first installment mostly lacked, is a riotously tongue in cheek tone that makes for one hell of a ride.

The film continues the adventures of Barney Ross (Slyvester Stallone) and cohorts, mercenaries for hire, who happen to have a soft spot for social issues. This time the team is sent on a mission by mysterious CIA agent Mr. Church (Bruce Willis, in a much expanded role) to recover a box from a crashed plane that puts them up against the ominously named  Villain (Jean-Claude Van Damme) who plans on selling some uranium he’s found left over from the Cold War in Russia. That’s about as much plot as the film has, but anyone expecting anything else should probasbly steer clear. 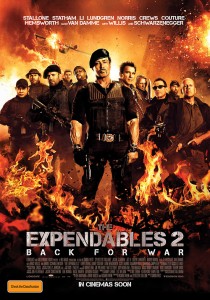 The Expendables 2 is everything the first part wasn’t. Mostly avoiding the dark unpleasantness that hung over that film (as it did with the fourth Rambo movie), Stallone (still a co-writer) hands over directing duties to the extremely capable Simon West (whose Con-Air was one of the best of the late nineties new wave of action film). This is everything a fan of the eighties and early nineties action films could hope for. Complete with cheesy references to the stars various franchises and horrible puns (“Rest in pieces!”) it runs gleefully from one action packed, ridiculously violent set piece to another.

Considering that the film is made up of stars not exactly renowned for their acting abilities, the performances vary across the board. Stallone mumbles unintelligibly, as does Dolph Lundgren but at least he does it with some humour. Chris Hemsworth shows great promise as a newbie to the team, and Van Damme is surprisingly good in an underwritten role. The rest of the cast, Jason Statham, Jet Li, Terry Crews and Randy Couture, mostly just make up the numbers. The highlight of the movie though is Chuck Norris, not because of any revelation of a hidden talent for dramatic acting, but because his presence is used to create some of the greatest and funniest moments in the film. A final battle that pits Stallone, Arnold Schwarzenegger and Willis against an army of bad guys before being joined by Norris will surely rank as one of the greatest moments in action cinema.

Despite coming almost twenty years too late, The Expendables 2 is a fun filled action yarn that even if it isn’t a masterpiece by any stretch of the imagination, achieves exactly what it sets out to do.

The Expendables 2 is in Australian cinemas from 30 August through Roadshow Films.

Written By
Chris Smith
More from Chris Smith
Produced at the height of the first 3D phase in 1953 (which...
Read More