In the introduction to his collection of reviews Francois Truffaut famously made the demand “…that a film express either the joy of making cinema or the agony of making cinema”. After years of using his dry humour to express the agony, Woody Allen for arguably the first time, expresses the complete joy of cinema with his semi-musical romantic comedy Everyone Says I Love You.

The film tells the bittersweet connected stories of a well-to-do Manhattan family, as well as their extended family and acquaintances, and spans the globe from New York to Venice.  The narrative picks up straight away, after a brief musical number that establishes the tone for the film, with teenage girl DJ (Natasha Lyonne) introducing the main characters in sharp and amusing narration. There’s Holden (Edward Norton) and Skylar (Drew Barrymore), two young lovers who’s relationship is put into question upon the arrival of a career criminal (Tim Roth), the parents of the family, Bob (Alan Alda) and Steffi (Goldie Hawn), Steffi’s ex-husband Joe (Allen) who still enjoys a good relationship with Steffi and her new husband, and many, many more. 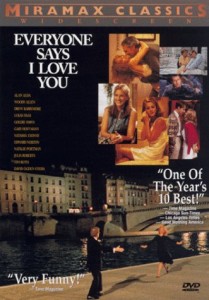 Composed of one of his largest ensemble casts (and Allen is known for his incredible line ups of talent), the film features fine, committed performances and songs from stars not generally known for their singing abilities. It won’t come as a shock that some of them aren’t terribly good, but the tone of the film is such that it never really matters and we simply enjoy their attempt. Allen’s staging of the numbers, although never complex, is efficient and fun. Again, the joy of the film comes not from brilliant accomplishment, but from the level of effort the cast and Allen put into the film.

The film also features what must be one of the most magical moments in Allen’s career, if not cinema itself, when during a heartwarming musical number between himself and Hawn, set against the backdrop of a warmly lit river in Paris, he begins to magically move her across the frame before levitating her into thin air and holding her gracefully above. Anyone who doubts Allen’s skills as a visual film maker would do well to revise their opinion after that stunning scene.

Everyone Says I Love is an irresistible and criminally under rated nineties Allen film, that more so than any other in his career, expresses the cinema’s potential for showing the simple joys of life.

Written By
Chris Smith
More from Chris Smith
From the moment the thunderous musical score comes into full swing with...
Read More