Total Recall is essentially the definition of the old saying “If it ain’t broke, don’t fix it.” For Arnold Schwarzenegger fans you’ll remember the 1990 classic as a breakthrough and for the Total Recall fans you’ll definitely have loved the book. Unfortunately the Len Wiseman 2012 version is neither of these and fails to stand alone as something more or even equal.

The films itself follows the life of Douglas Quaid (Collin Farrell) as he goes about his day-to-day routine in what he sees as a mundane existence. He lives in a small crappy apartment with his wife Lori (Kate Beckinsale), visits the same shoddy pub each night with his best mate Harry (Bokeem Woodbine) to drink sub-par beer so they can forget just how average their lives are.

However, when Douglas heads to a club called “Recall” in what can only be described as the prostitutes china town, his dismal reality is revealed to be a lie. Doug is actually a spy by the name of Hauser who was attempting to over through the totalitarian leader  Cohaagen (Bryan Cranston) before his memory was wiped. 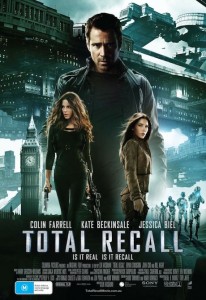 Total Recall would actually be bearable if it wasn’t for the needless amount of clichés and familiar faces. First off is the amount of lens flare in this film. Why oh why is there suddenly a need to add lens flare to actions films to heighten the drama? Just because James Cameron did it with Avatar doesn’t mean you can pull it off. Which by the way, you didn’t Wiseman.

Second; the femme fatale. It’s been done a million times before so try changing it up. A seemingly helpless woman who is actually a trained killer is almost as common as the amount people from the country still wearing crocs (I’m from there, so I’m allowed to say that). Third; don’t have John Cho from Harold & Kumar Go To White Castle playing a serious role. Furthermore, what the hell is Malcolm’s dad/Breaking Bad‘s Bryan Cranston doing in this film?

Total Recall is frustratingly irritating. Yes that’s a tautology but this film is just so annoying it needs two adjectives side by side to demonstrate how face-palmingly exasperating it really is.

The saving grace for this film comes from Bill Nighy when he screams “SHUT IT ALL DOWN.”  Indeed Bill, shut it down; shut it all down.

Total Recall will be theatrically released in Australian cinemas from 23 August through Sony Pictures.