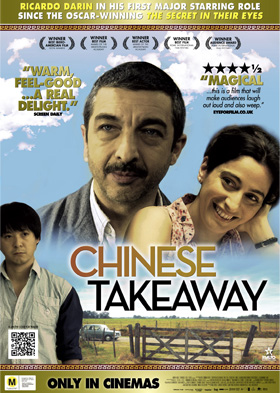 Courtesy of Rialto Distribution, Film Blerg is giving away 5 double passes to CHINESE TAKEAWAY, in cinemas from Thurs 30 August.

Film Synopsis:  Winner of Best Film and the Audience Award at the Rome International Film Festival, CHINESE TAKEAWAY is a comedy following the relationship between a reclusive Spanish hardware store owner and a Chinese immigrant, thrown together by an absurd twist of fate.

For over 20 years, introverted hardware store owner Roberto (Ricardo Darín, THE SECRET IN THEIR EYES) has lived virtually shut off from the outside. After a chance encounter with Jun, a Chinese man who has arrived in Argentina looking for his only living relative, Roberto takes him in. Their unusual cohabitation helps Roberto bring an end to his loneliness, but not without revealing to the impassive Jun that destiny’s intersections are many and they can even divulge the film’s surreal opening sequence: a brindled cow falling from the sky.