In a world of reboots, sequels and reimagining’s it comes as no surprise that a Bourne film without Matt Damon would hit the big screen.

This time around Oscar nominee, Jeremy Renner, takes the lead role. Joining him is the beautiful Oscar winning Rachel Weisz, who has remained very active over the years, although, if not a little out of the public consciousness.

Aaron Cross (Renner) is a member of Operation Outcome, a top-secret program of the Department of Defence. As part of the program, Aaron takes specially designed pills to enhance his physical and mental capabilities. As political matters within the CIA escalate to the point that the project could be jeopardized, it is ordered that all agents of the program be terminated. Escaping and subsequently on the run, Aaron locates Dr Marta Shearing (Weisz) who helped design the pills. Both are targets, which will set them on an international chase.

Perhaps only to keep the name of ‘Bourne’ in the title, the film is peppered with constant reminders of Matt Damon’s character of the previous three films. Although, a quick hint of a photo of the character would have been suffice. It does not stop there, mentioning the character and obvious hints to his existence eventually dispels as the relationship between Renner and Weisz’s character develops. 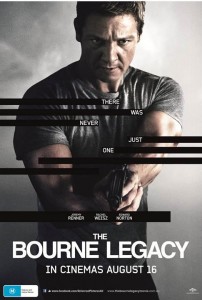 To strengthen the bridge further between previous films, Albert Finney and Joan Allen make seemingly unnecessary (billed) cameos. The audience is led to believe the events of this film are happening simultaneously as the previous Bourne film.

With Tony Gilroy at the helm as screenplay writer and director, this really should have been better. Gilroy has a brilliant body of work, penning screenplays for Dolores Claiborne, Michael Clayton, Duplicity and State of Play, not to mention the previous three Bourne films.

The film tries to be stylish and complicated, weaving us through cryptic conversations with secret intelligence agents. Though lengthy chase scenes and excellent fight scenes help heighten the senses. A chilling scene where a brainwashed doctor shoots all his co-workers and then subsequently shoots himself is incredibly tense and played well by Zeljko Ivanek, who is best known for his Emmy award winning role in TV drama Damages.

Without giving away the obvious, the film leaves the door wide open, not unlike a James Bond film, in case a sequel is green lighted. If such a thing happens, an film an improved follow-up with Renner and Weisz would be intriguing, as the two could easily play secret agents not unlike John Steed and Emma Peel from The Avengers.

With a more coherent script, more for Renner and Weisz to chew on, this film could have risen about a formulaic popcorn action thriller.

The Bourne Legacy is in Australian cinemas from 16 August through Universal Pictures.

Written By
Paul Flavel
More from Paul Flavel
It is that exciting time of the year again when Melbourne’s iconic...
Read More