“With an intellect that big, you tend to create your own moral universe”.

In Bullets Over Broadway, Woody Allen gives us another, and possibly the best, of his potentially autobiographical tales of “putting on a show”, this time against the backdrop of the twenties Broadway scene and the New York mob underground.

The film tells the story of a struggling playwright David Shayne (John Cusack) who in order to get his latest production up agrees to take finance from the mob with the condition that the head Gangster’s girlfriend Olive (Jennifer Tilly) is given a starring role. Naturally, she’s terrible, but she’s also accompanied by a bodyguard, Cheech (Chazz Palminteri), who happens to be a wunderkind playwright himself, and after some reluctance eventually becomes involved as a ghost writer who invariably turns the play into a masterpiece. 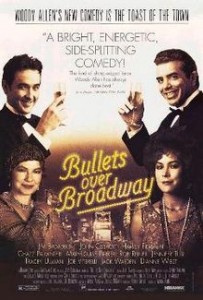 Bullets Over Broadway is essentially Allen’s assessment of the creative process and the fickle nature of genius. He explores the pretentiousness of the artist, the elusiveness of great ideas and the role ego, and does it with incredible honesty. The character of David Shayne at one point reflects that he has spent years in training, learning from the masters, and starving while he fine tunes his art, but a mobster like Cheech can come along with no experience whatsoever and take his good work and make it great. This seems to be the point Allen is coming to: that talent isn’t something you can learn, it’s something you either have or you don’t, and ranks as one of the less inspiring but most blunt messages in his films, but then again, despite his humor, Allen has rarely been an optimistic filmmaker.

The period trimmings of the film are gorgeous, with Allen regulars Carlo DiPalma as cinematographer and Santo Loquasto as production designer. The performances are excellent. John Cusack perfectly channels Allen as Shayne (in many ways he has shown himself to be the younger version of Woody Allen independent of their collaborations), Chazz Palminteri is explosive as Cheech, Jennifer Tilly with her usual raspy voice is suitably intolerable as Olive, and Diane Wiest (winning a second Oscar in Allen’s work) is perfect as an aging actress, recalling Gloria Swanson as Norma Desmond in Sunset Boulevard with her exaggerated gestures and ridiculous inflections.

Beautifully designed and acted, brilliantly crafted by Allen and co-screenwriter Douglas McGrath, Bullets Over Broadway is a sensational film, and ranks as one of Allen’s best from the nineties.

Written By
Chris Smith
More from Chris Smith
The world of cinema is full of tales of moves that almost...
Read More