Based on the mash-up novel of the same name, the title of Abraham Lincoln: Vampire Hunter would at the least suggest a ridiculously absurd take on American history. Kazach director Timur Bekmambetov, who came to prominence with the stylish action film Night Watch, instead decides to approach his source material with the upmost of seriousness, with the end product suffering as a result.

It puts forwards the initially intriguing thesis that in addition to his historical legacy as an American president, Lincoln (played by Benjamin Walker) had a less publicised second career as a hunter of the undead the, in order to avenge the death of his mother at the hands of a vampire. In this particular re-imagining of history, American slavery provided vampires an opportunity to hunt down victims with impunity, with the Civil War just as much about ridding the nation of vampires as ending African American enslavement. 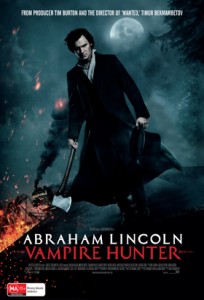 The above plot description would seem to provide the perfect ingredients for an entertaining B movie gore-fest. What audiences get is a straight-faced action film that doesn’t depart from the associated genre conventions in any meaningful way. It’s in many respects a perfectly competent blockbuster of its type, with the plot and any meaningful character development taking a back seat to one stylishly directed action sequence after another.  The most striking aspect of Abraham Lincoln: Vampire Hunter is how it manages to pass itself off as an anonymous effects heavy Hollywood spectacle in spite of its wonderfully farcical premise.

In addition to this, the film is also let down by its seemingly sub-standard and unfinished visual effects. They come across as particularly unconvincing and muddled in the 3D version of the film, undercutting its vain attempt to ground the story in some sort of historical verisimilitude.

The film’s aversion to humor unfortunately means that it drags on longer than its 105 minute running time suggests, limping towards an anti-climatic finale, devoid of any tension whatsoever. Abraham Lincoln: Vampire Hunter inadvertently comes across as cold and lifeless as the monsters it depicts.

Abraham Lincoln: Vampire Hunter is in Australian cinemas from 2 August through Fox.

Written By
James Zarucky
More from James Zarucky
Danish director Thomas Vinterburg has never been one to shy away from...
Read More