Surprising is a word that springs to mind when thinking about Magic Mike. Surprising that Steven Soderbergh, a name that conjures up images of tough, confident women fighting for the rights of hard done by individuals or a gang of smooth talking, Hollywood heart throbs pulling off elaborate heists, not beefed up, oiled up man candy bumpin’ and grindin’ on stage in clichéd female fantasy costumes.

Surprising because the films events are loosely based on the real life experiences of charming star Channing Tatum’s life as a 19 year old male stripper. And surprising because it started off so well and with such promise that it absolutely broke my heart when it deteriorated into incomprehensible, unnecessarily complicated, dramatic crap. 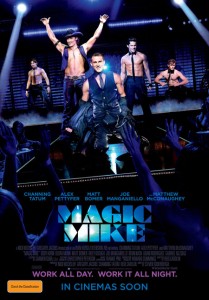 Beginning with a fantastically sleazy, greasy behind shot of the effervescent Matthew McConaughey on stage revving up the crowd at his male dance revue, the film is set up as a sex fantasy fuelled romp that doesn’t take itself too seriously. Awkward inter-title declares that we are in the month of June and enter the incredibly delicious and ever charming Tatum. He appears to live the perfect life; hot booty call who doesn’t mind a threesome, creative and talented with his hands, ambitious and hard working, the ultimate role model for the troubled Alex Pettyfer, a college drop out with reality issues.

Ultimately you can see where this is heading, particularly when mild, forced sparks fly between Tatum and his protégés sister. Relationship woes and the uncontrollable pace of life getting in the way of individual plans would have been enough to keep this film light and frothy but instead the powers at be decided to throw in drug dealing and overdoses to needlessly ramp up the drama.

If you look past all that, Magic Mike is a great film filled with fantastic, over the top dance routines, weirdly natural fly on the wall banter, odd and strangely artistic cinematography, perfectly timed, month-declaring inter-titles that add extra emphasis to punch-lines, McConaughey delivering a pitch perfect and hilarious performance, and partially naked men. What more could you ask for?

Magic Mike is in Australian cinemas from 26 July through Roadshow Films.

Written By
Kendal Coombs
More from Kendal Coombs
One word that comes to mind when thinking about the filmography of...
Read More