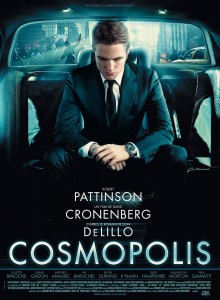 Courtesy of Icon Films, Film Blerg is giving away 5 double passes to COSMOPOLIS in cinemas from Thurs 2 August.

Film Synopsis: New York City, not-too-distant-future: Eric Packer, a 28 year-old finance golden boy dreaming of living in a civilization ahead of this one, watches a dark shadow cast over the firmament of the Wall Street galaxy, of which he is the uncontested king. As he is chauffeured across midtown Manhattan to get a haircut at his father’s old barber, his anxious eyes are glued to the yuan’s exchange rate: it is mounting against all expectations, destroying Eric’s bet against it. Eric Packer is losing his empire with every tick of the clock. Meanwhile, an eruption of wild activity unfolds in the city’s streets. Petrified as the threats of the real world infringe upon his cloud of virtual convictions, his paranoia intensifies during the course of his 24-hour cross-town odyssey. Packer starts to piece together clues that lead him to a most terrifying secret: his imminent assassination.

Written By
Film Blerg
More from Film Blerg
Welcome to WordPress. This is your first post. Edit or delete it,...
Read More