For decades, employing classical musical has been a tried-and-true method for building suspense in horror films. But does it work the same way in reverse; can a film about classical music successfully mimic the temper of a horror?

Despite what the poster might imply, Curse of the Gothic Symphony is not a frightening film. Stressful, yes. But suspenseful, no. In saying that, Randall Wood’s Curse is a satisfying music documentary that will please most cinemagoers, so long as they’re not expecting the next big thing in the mystery-thriller genre.

Curse follows a group of ambitious Havergal Brian diehards as they prepare for the very first performance of the extravagant yet breathtaking “The Gothic” in Australia. Considered the longest symphony ever written, Brian’s masterpiece is extra unique for the immense logistical difficulties involved in putting it together.

The titular curse keeps the audience constantly guessing as to whether the Brisbane performance will go ahead or crumble like previous attempts. But the film’s real hook are the individual character profiles, particularly that of Havergal Brian Society members Gary Thorpe and Malcolm Macdonald. 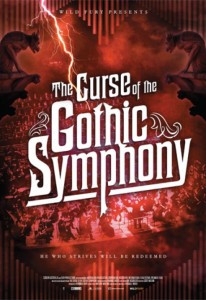 Their shared fascination with the life of a Brian – a flawed genius if there ever was one – is captivating viewing. Neither character is apologetic about their shameless love for their hero; even during a Scrabble game with his wife, we see Thorpe finding a place for the words “gothic”.

The film’s biggest downfall is its failure to realise that this subplot is engrossing in its own right. Instead, as the name implies, Curse of the Gothic Symphony vainly tries to sell itself as a nail-biting thriller. Such an intention makes way for some amateurish graphics, stylised flashbacks and ceaseless use of Copperplate, one of Microsoft Word’s less aesthetic fonts.

Most cringeworthy, however, is the intentionally uneven camerawork and awkward close-ups the film employs. While the technique fits the artificially tense mood, it takes away from the otherwise wonderful moments of cinematography in Brisbane, London and Ballater, Scotland.

While such flaws will leave some finicky viewers cringing, the film’s strengths are greater than its weaknesses. Most notably, all the characters are genuine and likeable. Film producer Veronica Fury, conductor John Curro and Thorpe might spend the majority of their film time trapped in anxiety, but the film’s candid moments reveal their human side. Whenever good news arrives, we are treated to their raw emotions, too often hidden beneath their restless veneers.

All things considered, Curse is a heartwarming and enjoyable piece, even if it is a tad overproduced. Thespians and musicians alike will relate to the hectic behind-the-scenes show-must-go-on attitude. Meanwhile, fans of art and film will appreciate the cordial caricatures and their obsession with an evidently underappreciated composer.

Curse of the Gothic Symphony is in Australian cinemas from 21 July through —.