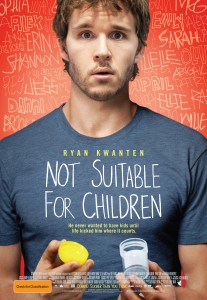 Courtesy of Icon Films, Film Blerg is giving away 5 double passes to see Ryan Kwanten in NOT SUITABLE FOR CHILDREN only in cinemas from 12 July, 2012.

Film Synopsis:  NOT SUITABLE FOR CHILDREN is a modern romantic drama with a twist – for once it is the guy’s biological clock ticking.  With Academy Award nominated director Peter Templeman in his feature directorial debut and written by Michael Lucas (Offspring), NOT SUITABLE FOR CHILDREN is an upbeat story of Jonah, played by Ryan Kwanten (True Blood), who embarks on a crazy caper to find the ‘one’, after discovering that he’ll be infertile in a month.  Joining Kwanten in the ensemble cast is Sarah Snook (AACTA Best Actress for Sisters of War) and Ryan Corr (Packed To The Rafters).

ONLY AT THE MOVIES JULY 12TH