“Remember, if it bends its comedy. If it breaks, its not”.

Woody Allen ended the eighties by combining the plight of the intelligent, but constantly downtrodden hero from his light-hearted pure comedies with the darker, richer thematic concerns of his more dramatic work. Combined in two stories, one a crime, the other a misdemeanor, Allen produced one of his richest films to date, featuring one of the decade’s finest cinematic performances from Martin Landau.

The crime portion of the film concerns the story of Judah (Landau), an aging Jewish businessman who’s having an affair with Anjelica Huston’s ­­­­­­­­­­­­­­­­mentally unstable stewardess, Dolores.  He decides to break it off but she threatens to destroy his life as he knows it, by not only revealing his infidelity to his family, but his financial indiscretions to the police (this being the age of the “greed is good” philosophy memorably trumpeted by Gordon Gekko in Wall Street).  Seemingly without option, Judah conspires with his shady brother (Jerry Orbach) to have her murdered. The film then follows Judah’s journey of personal hell as he attempts to the deal with the guilt of what he’s done. Contrasting this story tonally, the film also follows Allen’s documentary film maker (the characters are linked through a family connection) as he hits professional rock bottom and is forced to produce a documentary on his successful, but much loathed, television producer brother in law Lester (Alan Alda). In doing so, he falls for Halley (Mia Farrow) and goes on his own personal journey of whether or not he can cheat on his wife. The two stories converge thematically at a family get together in the final scene. 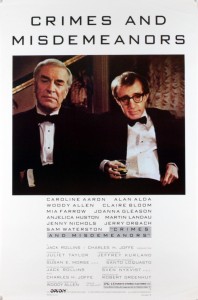 The thematic concerns of the film are its highlight. The (superior) plot involvingJudahis incredibly well written and executed by Allen. He follows the character to his lowest point and frames his journey with questions of religion, specifically Judaism, and morality. The scene where the adultJudahremembers the adults of his youth discussing these topics and then interacts with them is one of the greatest in all of Allen’s work. Also brilliant is Allen’s conviction in not taking the moral high road in the end and simply allowing his characters to continue on their journeys without any traditional punishment or consequence.

The performances in the film are all excellent. Alan Alda is hysterical as the smarmy Lester and Mia Farrow does some of her best work as another one of Allen’s leading ladies. Sam Waterston is also excellent as a rabbi going blind in a subplot that could very well be the highlight of any other film but is only one masterful element in this one. The performance of the piece though is from Landau. He is mesmerizing for every second he’s on screen and gives the finest performance of his career as the guilt ridden “good” man. Also worthy of note is former Bergman cinematographer Sven Nvkvist’s beautifully dark and cold imagery that compliments the tone of the film perfectly.

Only flawed in its tenuous linking of it’s two stories (which don’t necessarily come to form a cohesive whole), Crimes and Misdemeanors marks the end of Allen’s work in the eighties, and what some might consider, beginning with Stardust Memories, the richest and most interesting period of his career.

Written By
Chris Smith
More from Chris Smith
After a long and troubled release history (the film was shelved in...
Read More