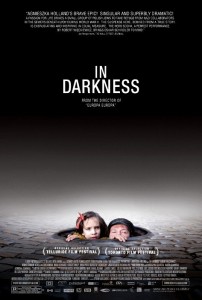 Synopsis: From acclaimed director Agnieszka Holland, In Darkness is based on a true story. Leopold Socha, a sewer worker and petty thief in Lvov, a Nazi occupied city in Poland, one day encounters a group of Jews trying to escape the liquidation of the ghetto. He hides them for money in the labyrinth of the town’s sewers beneath the bustling activity of the city above. What starts out as a straightforward and cynical business arrangement turns into something very unexpected, the unlikely alliance between Socha and the Jews as the enterprise seeps deeper into Socha’s conscience. The film is also an extraordinary story of survival as these men, women and children all try to outwit certain death during 14 months of ever increasing and intense danger.

Verdict: Poland’s official entry into last year’s Oscars looks haunting and very intense. Holocaust stories will do that to you, and this story seems to be yet another interesting singular story, told from millions.

Written By
Film Blerg
More from Film Blerg
Thanks to StudioCanal, we're giving away 5 double passes for the new...
Read More