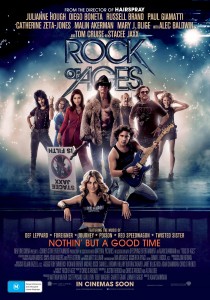 Courtesy of Roadshow Films, Film Blerg is giving away 20 single passes to see Tom Cruise and a whole lot of 80s rock music in his new flick ROCK OF AGES only in cinemas from 14 June, 2012.

ONLY AT THE MOVIES JUNE 14TH

20 winners will be randomly selected from those who share the status with the stated written material.