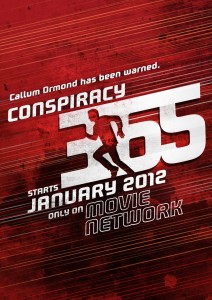 Courtesy of FMC and the Movie Network Channels, Film Blerg is giving away a Conspiracy 365 prize pack which includes:

Follow the life of teenager Cal Ormond who is forced to become a fugitive as he searches for the truth behind a deadly family secret. With 12 gripping monthly instalments telling the story from January to December, this series will keep you entertained all year with an online and mobile experience accompanying the TV series on FMC. Immerse yourself in the action with games to play, exclusive videos to watch and rewards to compete for.

To join the conspiracy head to www.conspiracy365.tv

Written By
Film Blerg
More from Film Blerg
So it seems that once again, for some strange and unknown reason,...
Read More