After a decade of critical and commercial success making fairly accessible comedies in the seventies with the likes of Annie Hall and Manhatten, Woody Allen began the eighties with the relatively experimental Stardust Memories and continued this impulse through to 1983 when he released the pseudo-documentary Zelig.

The film follows, in a documentary format consisting of news reel footage (some real, some made for the film), voice over and interviews, the misadventures of the titular Leonard Zelig (Allen) who has the ability to physically and mentally transform into the men that surround him and becomes a kind of pop phenomenon in 1920’sand 1930’s America. He is soon brought to the attention of psychiatrist Dr. Eudora Fletcher (Mia Farrrow) who attempts to cure him of his affliction and eventually falls in love with him.

Zelig is probably the least accessible of Allen’s films to get into and takes some effort from the casual Allen fan. The footage is expertly crafted, and the modern aspects, such as Allen and Farrow, are all incorporated fantastically by regular Allen cinematographer Gordon Willis who was nominated for an Academy Award for his work here. The idea of a star being inserted into the same space as famous people from another time (here Allen can be seen socializing with the likes of Charlie Chaplin and listening to a speech from a pre-WW2 Hitler) would of course go on to be imitated memorably by Robert Zemeckis with Forrest Gump, but it’s interesting to note that the idea and technology began (and was essentially perfected) with Allen here. 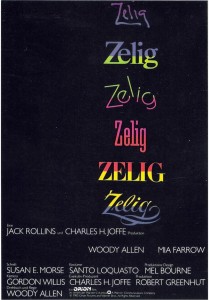 The humor of the film is mostly from the dryly ironic ‘educational film’ style narration from Patrick Horgan that oddly detracts from the movie, somehow making the impressiveness of the technical achievements seem a lot less serious. It also acts a scathing satire on the media and public sensibilities as it tracks the journey of Zelig’s discovery being sensationalized and marketed by the media (in toys and various songs) to his downfall from a public outcry from the results of his many different personalities which he can’t remember.

The film is indeed cleverly crafted, but its cleverness and intelligence seem oddly lost in the mockumentary format.  It’s technically accomplished, interesting, and of course influential, but in terms of the usual standards of a Woody Allen movie, it’s a little dull.

Written By
Chris Smith
More from Chris Smith
The potentially devastating consequences of keeping wild animals in captivity, for both...
Read More