Outrageous provocateur Sacha Baron Cohen returns with his follow up to Borat and Bruno with The Dictator. Pushing the envelope once again, Cohen plays a fictional dictator of an invented Republic of Wadiya.

During a protest outside a hotel, the real and freshly shaven Aladeen meets Zoey (Anna Faris in a very bad wig), a radical, left-wing, organic growing, peace lover with unshaved armpits. A weak and flimsy plot sees the pair accessing the Wadiyan government by Zoey’s catering food co-op. Like most of Cohen’s previous efforts, the skits that exist within the film are much more enjoyable and humourous than the general plot itself.

Purposefully offensive, Cohen allows for Aladeen to say and do the most abhorrent and inappropriate actions and gets away with it. Playing such a character can allow for free reign, but there still seems to be limits. It is unlikely, however, that limits are an issue if you’d be paying to see this film, especially after Cohen’s prior works. Cohen easily provokes visceral reactions in his humour, but his own performance does not equal the decent supporting performances he has given in Hugo and Sweeney Todd. 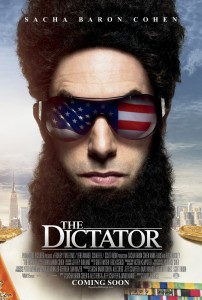 The Dictator’s best moments come with wryly observational dialogue rather than the over-the-top stunts. Giving a speech to a group of American diplomats, Aladeen describes the benefits of a dictatorship where the similarities to Western politics are pointedly clear.

Larry Charles, a former Seinfeld writer and director of Borat and Bruno is on board once again with directing duties. Charles and Cohen have an interesting dynamic where the camera follows very quickly behind Cohen ready for instantaneous eruptions and explosions of sardonic humour.

Briefly making an appearance, the male penis is becoming more of a frequent staple in the American Hollywood film. The days of Porky’s are gone and radicalised images of the male body exist in its place. The male body has become a spectacle, but not existing in the same parameters as the triple female gaze. It is, however, still a film written by a man, directed by a man, starring a man for a predominately assumed male audience.

Offensive, crass and fierce, The Dictator will offend countless amounts of people, but will make many more laugh. Whether or not this is a good thing remains too existential a question for a short film review.

The Dictator is in Australian cinemas on 16 May through Paramount Pictures.