Vampires, werewolves, ghosts and witches are quite the material for a 1960s soap opera. Long before the days of Twilight and True Blood, Dark Shadows lent itself to the mysteries of the supernatural.

Forty years after its television conclusion, Tim Burton brings the story of Barnabas Collins onto the big screen with some script writing assistance from Seth Graham-Smith and John August.

Cursed as a vampire by the love scorned housemaid Angelique (Eva Green), Barnabas Collins (Johnny Depp) was placed in a coffin and buried underground for two hundred years. Discovered during a building excavation, Barnabas remerges into the twentieth century despondent and bewildered. Journeying back to his home in Collinsport, Barnabas discovers that the town his family pioneered and industrialised has been monopolised by Angelique. Distant ancestor Elizabeth (Michelle Pfeiffer) and her family now reside in the family mansion Collinwood. Ambitious yet out-of-place, Barnabas sets out to restore the rightful order of Collinsport. 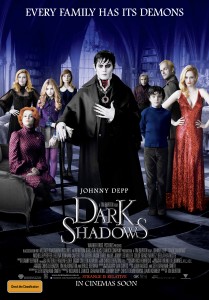 Ever the fan of a gothic aesthetic, Burton and his regular team of creatives construct a world that is reminiscent of the horror movies of 1920/30s Hollywood. Many of Depp’s poses lend itself to the foregone era, posturing as a playful and tender homage. Colleen Atwood’s costumes wonderfully blend the psychedelic seventies with the traditional garb, and Rick Heinrichs lush and imperial production design is simply breathtaking. Danny Elfman also returns with an expected zany, twisted and shadowy score.

Depp is predictably enjoyable as Barnabas, as he also lends a producing credit having been a long time fan of the original series. Familiarly seeking vengeance upon an evil antagonist (similar to Sweeney Todd), Depp is both sensitive and blood thirsty in his ascension. Michelle Pfeiffer is a welcome returned guest to Burton’s repertory ensemble. Pfeiffer’s natural beauty is ever present as she plays an unwavering and stern matriarch who gets to climatically defend her land with a shotgun in tow. Eva Green is a devilishly delicious as the evil Angelique, audaciously camping up her kitschy performance with furvour.

Despite third acting billing, Helena Bonham Carter’s supporting performance lacked a great deal of purpose (if we don’t count the final seconds of the film). Bonham Carter’s inclusion feels more of a certainty in a Burton film now, rather than an exciting prospect. Bella Heathcote plays Barnabas’ love interest with a mysterious past well but the age difference is truly undeniable. Chloe Grace Moretz and Gulliver McGrath are quite enjoyable as the current Collins children, both exhibiting a cool darkness.

An ode to both cult television and classic horror films, Dark Shadows is an enjoyable romp in typical Burton gothic style.

Dark Shadows is in cinemas 10 May through Roadshow Films.

Written By
James Madden
More from James Madden
Steve McQueen really does have a thing for the embattled and imprisoned...
Read More