Two episodes in and Laid continues to traverse the sexual warzone of an upwardly mobile suburban Sydneyite. But let’s call a spade a spade here: Roo (Alison Bell) is one desperate woman. After absconding from the hospital with her formerly comatose boyfriend Charlie (Abe Forsythe), there are few boundaries left for Roo to tread. After all, taking your boyfriend to a caravan park where an oily, sleazy sexual healer (Damon Herriman) works to cure patients leaves few options.

Desperation fuels Roo’s search for a cure, and if Marcus won’t sleep with Charlie, then she is begrudgingly willing to take on the nauseating task. Ever the dutiful friend, E.J. (Celia Pacquola) supports Roo in her quest for sexual salvation despite her repulsive thoughts. As any best friend would do, E.J. investigates further into the hideous existence of Marcus Dwyer. E.J. is not the only one searching though, as she discovers when Charlie’s mother Jan (Deborah Kennedy) finds her amidst Marcus’s workplace. Investigating together, the two plunge even further into the murky depths of depravity. Pacquoa’s horrified face says it all while witnessing an unspeakable act of pure abhorrent revulsion. With just one look, Pacquoa hilariously and unforgettably steals the scene. 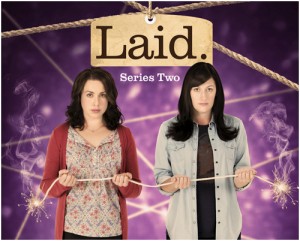 Manifestations of unholy power surrounds Zack’s (Toby Truslove) time too, as he attempts to channel his Jesus-like powers – all to no avail. Surreptitiously, Zack takes an opportunity to kidnap Marcus with the intention of preventing Roo’s wanton actions. The dim-witted mind takes over however, and the hostage situation thusly turns into muse-like advice from an experienced healer to an apprentice.

Naturally, Zack’s siege takes no effect, and Roo ends up on a dinner date with the conniving Marcus. He reveals the origins of his powers as an oily (and beared!) 11-year-old (Calen MacKenzie) where he first cured an afflicted classmate. Not even youthful innocence can add any empathy towards Marcus, mainly due to the brilliant creepiness displayed by Herriman.

Dan Luscombe’s music is noticeably absent from scenes driven with mainly dialogue. Though appearing in moments of action, the background score quickly disappears or fades away as the characters begin to verbally communicate. Awkward tensions are plentiful thanks in part to the writing, acting and direction, but especially to the lack of music.

Written By
James Madden
More from James Madden
Clint Eastwood plays against type as a disgruntled, down on his luck,...
Read More