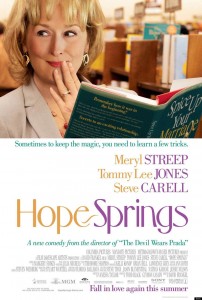 A trailer has arrived for the new Meryl Streep flick. Fresh from her pick up at the Oscars, Streep returns with a less meaty role. No, there’s no accent or fancy makeup to be fooled by, it’s just plain ol’ Streep on show.

Based on the trailer, expectations aren’t high which is disappointing. However, when expectations are set low, surprises can often surface. Sticking with the glass half-full attitude, Film Blerg hopes for the best for Hope Springs.

Roadshow Films will release the film in Australia on August 23.