“I could shave a spider’s arse if I wanted to.”

Game of Thrones has always counted quality dialogue among its many strengths, and this week’s second episode featured a concentrated dose of especially creative examples. The above quote, playfully highlights the sharpness of his blade, as Night’s Watch recruiter Yoren (Francis Magee) threatens Joffrey’s men in their continued search for Robert’s bastards. Only moments earlier, Arya (Maisie Williams) is baited by prisoners with the delightful “Come closer, and I’ll shove that stick up your bung-hole, and f**k you bloody!”. Then, a few scenes ahead, we witness Sam (John Bradley) learning about the flatulence that follows death, punctuated with a spirited recreation of its distinctive sound. Its good stuff.

Over at King’s Landing, Tyrion (Peter Dinklage) continues to assert his authority as the King’s Hand. Confident and calculated, he exiles the Commander of the City Watch as punishment for betraying Ned Stark, and for the brutality of murdering under Joffrey’s command. What’s interesting though, is the contrasting vulnerability revealed in a later scene with his sister. Clearly unravelling under the pressure of her duties as Queen Regent, Cersei (Lena Headey) snaps back at Tyrion when he makes a joke about her relationship with brother Jaime (one of this week’s absentees, Nikolaj Coster–Waldau). She has only to mention their mother, and how Tyrion’s birth killed her, for his confidence to be immediately shattered. Its a great way to contrast the earlier dominance he displayed in exiling the guard, and another example of how Game of Thrones excels at layering its characters, developing them with only a few scenes. 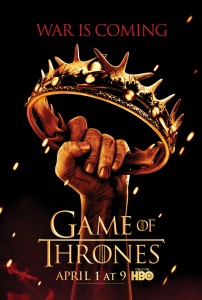 Arriving back home at the Iron Islands, Theon’s (Alfie Allen) reunion with his father Balon (Patrick Malahide) explores similar themes. Exuding confidence when charming women, Theon sleeps with a rodent-faced girl, but not before telling her to close her mouth when she smiles. Only minutes later, he’s on horseback, groping the woman he doesn’t yet realise is his sister. Just like Tyrion though, Theon is knocked down a few pegs, by his family. Balon questions Theon’s loyalty and rejects his offer of Robb Stark’s alliance, opting to put his daughter Yara (Gemma Whelan) in command of an army to further his own ambitions for the throne. Its mixing these more relatable themes of family conflict with the larger storyline, that makes the slower overall pace quite bearable – as this episode, like the last, serves mainly to continue establishing the major players for the rest of the season.

Further additions to the cast this week add to already swelling numbers, and their introduction comes at the expense of screen time for some old favorites. Daenerys Targaryen (Emilia Clarke) appears only briefly, while Robb (Richard Madden) and Catelyn (Michelle Fairley) Stark are left out entirely. Undeniably, its a shame when your favourites are neglected, but this approach is continuing to prove a successful measure for controlling the focus of the stories selected to be at the forefront. Well-written, colourful dialogue helps layer the characters with a real sense of personality that their short screen times would otherwise deny, and no scene feels like wasted time.

Slow starts are a necessity for a show of this scope, but it’d be nice to see the pace pick up a bit next week.