Hailed by Stephen King upon release in 1981 as “the most ferociously original horror film of the year”, The Evil Dead proudly continued in the footsteps of a long line of independent horror films in post World War II American cinema. Beginning with George A Romero’s masterpiece Night Of The Living Dead (1968) – to which this film with its isolated country house setting and zombie owes a great deal – and continuing through the 1970’s with the double punch ferociousness of The Last House On The Left (1972) and The Texas Chainsaw Massacre (1974), The Evil Dead took the genre a step further from its pseudo-documentary origins to a place where the style mattered every bit as much as the story.

The film takes the basic (and yes, familiar) concept of a group of young people travelling to a cabin in the woods to ostensibly have sex and do drugs. Their plan goes awry when they inadvertently unleash demons from the Book of the Dead that inhabits them one by one, turning them into revolting zombies. The hero (although he’s anything but a hero at this point in the what would become a trilogy) is Ash, played with a gleeful conviction by genre and Sam Raimi regular Bruce Campbell. The least said about the rest of the cast the better, although Hal Delrich (a pseudonym for actor Richard DeManicor) has a good scene with Ash when he tries to leave the cabin. The star of the film is clearly behind the camera.

Marking Raimi’s feature film directorial, The Evil Dead is an assault on the senses and began his virtuoso aesthetic that he would draw on throughout his career. With its insane camera angles and penchant for mounting a camera to anything that moves (a bike, a two by four, a boat etc.), the film is a creative and visual splendour. The 16mm grittiness recalls the immediacy of The Texas Chainsaw Massacre, and Raimi isn’t afraid to acknowledge his influences – Chainsaw iconography runs through the whole film and a torn up poster of The Hills Have Eyes began a running in-joke with its director Wes Craven. Although his wild visual style is always acknowledged, Raimi’s sense of rhythm and establishing mood, especially in the first part of the film, is also sensational. The slow build as the car approaches the cabin on a long descent through the woods is a brilliant study of building creepiness.

Technically the film is hit and miss. A low budget often hinders it, most notably with some poor lighting and some cheap make up effects. Thankfully Raimi and his team’s creativity gets them through. There are some excellent stop motion effects and the final showdown is as awe inspiring as it is insane.  Sound design and music are also astonishingly effective in creating the eerie atmosphere of the locations. 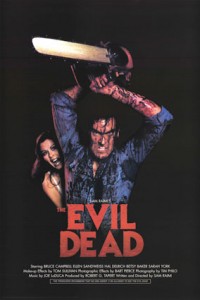 Like the majority of its predecessors, The Evil Dead found notoriety on its release for being listed as a “video nasty”, with the director’s cut banned in England and substituted with a severely censored version. Although blood and gore runs rampant throughout the film, it tends to be on the silly side (especially given the obvious budget restraints) and never really crosses the line. There is one questionable scene involving the rape of a girl by a possessed tree, that though sounding silly, is quite effectively directed and extremely unpleasant. That Raimi allegedly regrets putting it into the film, is some consolation, because it really serves no purpose.

More than anything, The Evil Dead shows the incredible promise of a film maker bursting at the seams with incredible energy and creativity, but still yet to really finesse his talent. He would however do this a few years later when crafting the sequel, Evil Dead 2: Dead By Dawn, a true masterpiece of the horror genre and visual storytelling in general. Groovy baby.

The Evil Dead is screening at the Astor Theatre Monday 16 April at 7.30pm as a Double Feature with Fright Night.