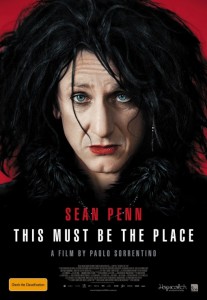 Courtesy of Hopscotch Films, Film Blerg is giving away 2 double passes and 5 two-for-one’s to see THIS MUST BE THE PLACE, only at the movies April 5, 2012.

Film Synopsis:   In This Must Be The Place, Sean Penn plays Cheyenne, a bored, retired, wealthy American goth rock star living in Dublin (and looking a lot like Robert Smith). He’s a complex character, bumbling around town with friends and living in an enormous mansion with his down-to-earth wife of 35 years, Jane (Frances McDormand.) When he learns of the death of his father – who he has been estranged from for over 30 years – he returns to America to embark on a road trip that will change him forever. His quest is driven by the revelation that his father was humiliated in Auschwitz at the hands of an SS officer, who may still be alive and living in America. Cheyenne’s search takes him across the heartland of a country now foreign to him, encountering some great people as he is reawakened to the possibility of reconciliation and self-discovery. This is a rare film that is able to mix stunning originality and elegance with real humanity. Penn is riveting, beguiling and downright perplexing in a performance that reminds you why he is one of the greats. Featuring a terrific soundtrack with music and lyrics by David Byrne and Will Oldham, This Must Be The Place is a genuinely unique film full of warmth, humour, profundity and lots of eye-liner.

Written By
Film Blerg
More from Film Blerg
Our extremely popular series of Classic Slaps proved to be too much...
Read More