The Hunger Games, the much hyped adaptation of Suzanne Collins’ wildly popular novel, has a wonderful central premise. In the future, two representatives from each of the 12 districts are chosen to take part in the titular games, which involve a televised battle to the death, til only one remains triumphant. In film terms though, it is not an entirely original idea, being quite similar to the premises behind Battle Royale and Series 7 and it also weaves in more than a little The Truman Show as well.

Of course there are so few truly original ideas that many fantastic films succeed in reimagining ideas that have been done to death through stylistic and narrative innovation. Unfortunately much of The Hunger Games is exceedingly plain and bland. The direction is flat to the point of non-existent. From a design perspective the film must have been manna from heaven. The rustic outlying districts make a wonderful contrast to the futuristic world of the Capitol. Unfortunately the futuristic set parts feel decidedly unoriginal, coming across as an amalgam of every sci-fi book you’ve ever read. The film is infernally shot, with a Shaky Cam chiefly to blame. I don’t have as much an issue with it as Australia’s pre-eminent film critic, but there is no doubt that here the technique is used far too much. The camerawork is messy and unnecessarily shaky, not just in the action sequences – unfathomably even some straightforward conversations are shot in this infuriatingly manner. Don’t get me wrong, the fight scenes are even worse in this shaky-cam regard. 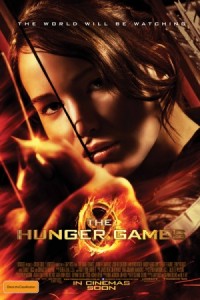 So going against the film is that it is poorly designed, shot and flatly directed. However, the film is wonderfully acted which makes up for many of its shortcomings and allows it to be more than bearable in the end. Jennifer Lawrence is Katniss, the film’s protagonist. The previously Oscar nominated Lawrence has an undeniable screen presence and gravitas. Unfortunately she seems a cut above most of the other young actors in the games, who seem better suited to Saturday morning television. The only other young actor who can hold his own with Lawrence, is Australia’s own Liam Hemsworth who impresses in a small role. Thankfully though Lawrence is complemented beautifully by a cracking support cast generally casting aside any inhibitions. Woody Harrelson is good as a grizzly, boozy former Hunger Games champion whilst Stanley Tucci delightfully embraces his over the top role as the TV analyst for the games, pulling off the purple pony-tail look with aplomb. Perhaps the standout though is Lenny Kravitz, who oozes charisma in a small role It is through the quality of the performances that, despite so much of the film falling flat, the emotional high points generally find their mark. Katniss volunteering to take her sister’s place in the Games a prime example.

Whilst the end result of the film is a passable big budget, teen aiming film, it could have been much more. Metaphors are there for the taking about the contemporary world, especially the haves/have nots dichotomy, but these are mostly ignored. Perhaps understandably, but still disappointingly, the inherent darkness in what is taking place here is not tapped as it could be. The approach to shooting and designing the film is too safe and hopefully the inevitable sequel will take a bolder approach in delivering something really spectacular.

Tim Hoar is the creator and writer of Not Now I’m Drinking a Beer and Watching a Movie. You can keep up to date with his blog by liking his facebook page here.