The third series of Showtime’s Tangle premiered last night with a terrific aplomb. Some changes have occurred since the previous season finale. Ally (Justine Clarke) has uprooted her family once again, this time to a seaside location. Money troubles see a downgrade in the new home, as Ally soon discovers that her kids don’t need her to survive. With little to do and no money in her pocket, Ally briefly enters Melbourne University upon finding a new purpose.

Meanwhile, Christine (Catherine McClements) is suffering signs of depression as she lies in her bed and wanders her house in a bathrobe after Tim (Joel Tobeck) relocates to Singapore. The inner turmoil acts as a consequence of her adulterous guilt in the last season. The brief affair still consumes her daily routines, also distancing her relationship between her adopted son Max (Blake Davis). Max also stirs the proverbial pot when he announces his plan to live with his birth mother Nat (Kat Stewart). 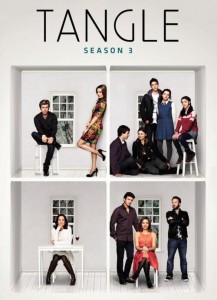 There is an incestuous hub of relationships existing at the core of Tangle. Series creators John Edwards, Imogen Banks and Fiona Seres explored how two families interconnected and then coped after a tragedy occurs in the first two seasons. The third season is set to explore life beyond grief, and after all of the broken pieces have been picked up.

Support from the younger actors in the series is also significantly impressive with Davis, Lincoln Younes, Eva Lazzaro, Georgia Flood and Lucia Emmerichs. One of Tangle’s greatest strengths lies in its oscillating nature of portraying the adults and the adolescents as more troubled and disturbed.

Clarke and McClements are terrific at playing the tortured and long-suffering matriarchs, while Stewart brings vivacious energy to each scene with impressive flair and panache. Day, Gurry and Tobeck are equally strong, but the women still dominate.

Emma Freeman’s direction sees the camera following each character like a ghost as they move from scene to scene, creating a sense of constant action. Fiona Seres’ script is on fine form too with sharp dialogue and bombshells aplenty. Season three of Tangle is set to be as entertaining and drama-filled as its previous two seasons.

Written By
James Madden
More from James Madden
Rarely does a film disturb molecules to such an extent that a...
Read More