A seaplane glides leisurely through the clouds and over the sparkling waters of San Juan, Puerto Rico, and Dean Martin’s “Volare” carries us gently into the dank, chaos of Paul Kemp’s (Johnny Depp) hotel room after a massive bender.

Depp, at first glance, sadly closer resembles Edward Scissorhands and not Raoul Duke – after all, are we not viewing this for another cinematic incarnation of Thompson? His drunken stumbling is not a bow-legged gait, his teeth are not balancing a cigarette holder – oh, this won’t be like Fear and Loathing in Las Vegas? This is the first of many misdirections in Bruce Robinson’s The Rum Diary.

Kemp arrives in Puerto Rico at a newspaper on its last legs. The high-strung editor in chief, Lotterman (Richard Jenkins), is hopelessly dependent on several deadbeat journalists to keep the press running and foolishly sees promise in the newest drunkard on his staff.

Puerto Rico in the 1950s is a growing tourist destination and as its un-touched islands are being bought up to build resorts, casinos, and “so many bowling alleys, it is horrible to ponder the meaning of it”. Kemp is happily along for ride, paid well for minimal work, until floating with the tide one night (nice metaphor) he meets Chenault (Amber Heard), the only white woman in Puerto Rico. 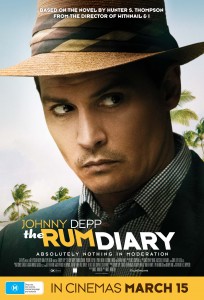 Aaron Eckhart plays a composite of two of the novel’s characters. Though called Sanderson, the slick PR suit eager to capitalise on paradise, he has also absorbed Yeamon, a heavy drinking, short-tempered writer with an irresistible thrill-seeking squeeze. Perhaps to give the film and its characters a little more purpose, Robinson favoured Sanderson as a kind of corporate villain, but Kemp’s relative political conscience (barely existent in the novel) is so weakly adapted to the screen that the conflict between the two, even with their mutual interest in Chenault, is dull and vacuous.

An excellent performance by Giovanni Ribisi as Moberg, a man so effected by substance abuse that he is sub-human and Michael Rispoli is a good sidekick to Depp, and perhaps their slapstick scenes together are the most memorable.

Puerto Rico’s history of U.S. repression was never grasped fully by Thompson, and how could it be? They were both victims of capitalism’s machinations; he through a lifetime of drug addiction and alcoholism, and Puerto Rico through Operation Bootstrap. The film fails as a legacy to Hunter S. Thompson because the novel wasn’t one of his best, and the script is polluted with bizarre trivial pursuits for its characters in order to shape some kind of plot or get a few laughs. Wouldn’t be surprised if Robinson directed it drunk too.

The Rum Diary will be theatrically released in Australia on March 15 through 20th Century Fox.