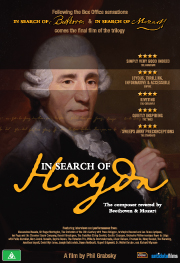 Courtesy of Antidote Films, Film Blerg is giving away 4 double passes to see IN SEARCH OF HAYDN, only at the movies March 15, 2012.

Film Synopsis: From Phil Grabsky, the award-winning maker of In Search Of Mozart and In Search Of Beethoven comes the final film of the trilogy, In Search Of Haydn. Joseph Haydn (1723-1809) was one of the greatest musical innovators. His close friend Mozart, and his student Beethoven greatly revered him yet today in concert halls he is often overshadowed in favour of his younger contemporaries. By speaking to the greatest living exponents of Haydn’s music, this film readdresses the balance and sheds light on the master and his work.

Written By
Film Blerg
More from Film Blerg
Here at Film Blerg, the festive season has had marginal impact on...
Read More