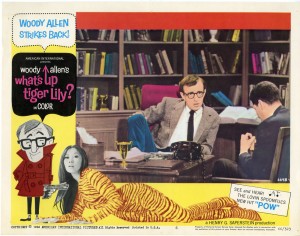 By 1966, Woody Allen was already something of a star.

After a decade as a wildly successful comedy writer and performer, Allen had an Emmy nomination to his name as well as a best-selling stand-up comedy record and a reputation as one of the most influential members of New York’s burgeoning comedy club scene.


At one such club appearance in the mid 1960s, Allen was approached by film producer Charles K. Feldman to write a film called What’s New, Pussycat?, which became the highest-grossing comedy film of all time upon its release, but Allen was displeased.

The script had been changed without Allen’s approval by Feldman and his studio executives, and though he was new to the cut-throat movie business the experience influenced Allen’s steadfast refusal to allow commercial considerations to interfere with his work again, a vow still intact to this day.

The next year, in 1966, Allen made his directorial debut with What’s Up, Tiger Lily?, so named in a shameless attempt to capitalise on Allen’s earlier success by producer Harry G. Saperstein. Meant as little more than a one-off gag, Saperstein offered Allen the chance to take an imported Japanese film and overdub it with comedic English dialogue for an eventual release as a tele-movie.

This practice had been pioneered by the TV series Fractured Flickers, in which recorded dialogue was layered over silent movies for comedic effect, but was certainly not a technique used widely enough to make What’s Up, Tiger Lily? anything but an oddity upon its completion. Seeing potential dollar signs Saperstein released the film to theatres, and Woody Allen’s career as a film director was off to a successful, if creatively unspectacular, start.

The Japanese film was Key of Keys, part of a James Bond rip-off series called International Secret Police, and Allen’s dialogue consisted mainly of pedestrian racial humour, baffling non-sequiturs, and the meta humour which has been a staple of the parody-overdub genre ever since. The clichéd spy story was changed to become a deadly search for the world’s best egg noodle recipe, although Allen seemed far more interested in using his new-found creative freedom to explore the comedic possibilities of puns based on Asian names.

In a twist of irony, in order to release the film to theatres Saperstein increased the film’s running time to feature length by splicing in nonsensical footage of a performance by hippie folk band The Lovin’ Spoonful, and incongruous footage from another International Secret Police film overdubbed by a Woody Allen impersonator.

The resultant film is a bizarre hodgepodge of broad humour, bad music and horrible voices, completely devoid of the incisive sensibility Allen would explore in his later work. It was certainly an influential film, paving the way for parody overdubs both good (Mystery Science Theater 3000, Hercules Returns, Bargearse) and bad (A Man Called… Rainbo, Kung Pow!: Enter the Fist), but other than that offers virtually no insight into Allen’s development as a filmmaker. It does, however, offer a persuasive argument in favour of retaining creative control over one’s work.

History has mostly forgotten What’s Up, Tiger Lily?, and for Woody Allen’s sake that’s probably a good thing. After a subsequent bad experience filming Feldman’s Casino Royale two years later, Allen would finally take things into his own hands and serve as writer, director and star in the 1969 mockumentary Take the Money and Run, an important stepping-stone on his way to superstardom in the 1970s.