The Source  is dolled-up as a bright, musical fable of female independence, but is essentially a story of the hopeless situation for the female under Islamic repression.

The women of an un-named North-African village (filmed on location in Morocco) routinely collect pails of water from a remote spring high on a dry, desolate rock. When this dangerous trek causes another pregnant local to miscarriage, Leila (Leila Bekhti), newly welcomed to the fold of women, rebels.

The miscarriage is not the first by far, a whopping 15-20 such incidents are counted out in one scene, and the women, led by Leila, take part in a “love strike”, refusing to sleep with their husbands till the matter is resolved and the women put out of danger. 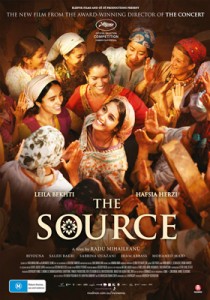 Her friends spend their time (outside of servitude) watching Mexican soap operas and discussing the men in the village. The initial outrage over miscarriage quickly becomes overshadowed by the starved sensuality of these women but the biggest insult is the staging of the revolution in the women’s’ communal bath house, where half of them argue their rights topless.

Leila’s husband Sami (Saleh Bakri) has taught her to read, but unfortunately the only verse she cites in support of her case are the Qur’an and some decadent Arabian Nights erotica – two texts that, despite the film’s insistence that they’ll deliver her, are undoubtedly instrumental in her oppression.
Writer/director Radu Mihaileanu uses various sub-plots to describe female disenfranchisement  in Islamic culture but the question is merely skirted; one cut-paste image follows the other : sex out of wedlock + veils + dowry + unsatisfying love + loveless marriage + repudiation etc. The result is a colourful yet ultimately thin collage-portrait of Islamic misogyny. Running an offensive 135 minutes, your time will be better spent on 21 Jump Street later in the month.
The Source will be released theatrically in Australia on March 8, 2012 through Madman Films.

To view the trailer in English, follow the link.