Oh, what could have been… Had production been indeed productive, John Carter might have been the first animated feature film in cinema, pipping Snow White and the Seven Dwarfs to the post. Instead, 79 years of nightmarish development and pre-production surrounded Edgar Rice Burroughs’ Barsoom series, which was first published in 1912.

Barsoom is the native word for Mars, which is where 19th century renegade and Confederate Civil War veteran John Carter (Taylor Kitsch) finds himself after stumbling across a vessel that transports him from a cave in the United States. In Barsoom, a civil war has been playing out between Zodangians, Heliumites and the Tharks. Taken captive by 12 green barbarians (the Tharks), Carter manages to impress the natives with his superhuman strength and thus meets Princess of Helium, Dejah Thoris (Lynn Collins). Together they battle the threat of extinction from the Zodanga, led by Sab Than (Dominic West). 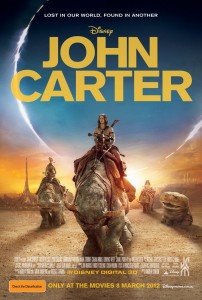 Similarities can be drawn to the stories of Pocahontas, Aladdin and even Avatar in their depictions of the hero’s journey. In fact, a whole slate of films could be interchanged for the three aforementioned titles. Carter is the white male protagonist that enters a foreign land, falls in love with the beautiful and all-knowing Princess, and protects the local savages from threat of extinction from malevolent forces. Despite this routine summation, John Carter is a character with an interesting backstory (although the acting may permit to think the opposite)

Kitsch’s problems are dramatically emphasised by the mounds of makeup placed on his eyes. While they detract from Kitsch’s superhero tone and disconcerting dialogue, they cannot completely be held accountable for the lacklustre performance. Collins provides a more affable heroine with toughness and grit, but still plays that stereotypical female character, rescued by the protagonist hero. Her attempts at embodying strength are virtuous, but come across as too earnest. Thankfully, Bryan Cranston provides some brief moments of acting relief with a brash performance as a local sheriff back in the US. Sadly, Cranston’s character departs the screen far too soon to be forgiven.

Andrew Stanton’s direction is fine and allows for the Barsoom world to exist in the hermetically stylised Disney world that we’ve come to know from films such as Prince of Persia and the Pirates of the Caribbean series. Stanton, Mark Andrews and Michael Chabon deliver a lacklustre script which is further marred by uninspiring performances. With eleven volumes published in the Barsoom series, let’s hope the next instalment (and no doubt there will be a next instalment) features a bit more energy.

John Carter will be theatrically released in Australia on March 8 through Disney.