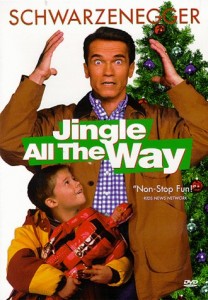 An unwritten code exists in the modern day American movie star’s handbook. That code stipulates that at the height of ultimate stardom, a Christmas film must be made. Similar to the code that many successful musicians abide by, a Christmas film equals ultimate celebrity success. And Arnold Schwarzenegger starring role in Jingle All the Way is no exception.

Howard (Schwarzenegger) is a hard working man who neglects his family. Sound familiar to the Christmas film genre? Well, maybe that is because it is a familiar story. As the film begins, Howard misses a karate ceremony, and redemption seems to be on the horizon. A narrative feat of strength is set for Howard that owes its purpose to the humble commercialism of Christmas. Howard’s son Jamie (Jake Lloyd) only wants one thing for Christmas: a Turbo Man action figure. Neglecting his wife’s request to pick up the doll weeks beforehand, Howard has to brave the Christmas Eve last minute shoppers to get the required doll.

While Schwarzenegger may not be the typical cinematic father, Rita Wilson belongs to a more archetypal June Cleaver-esque mother. Her warm demeanour adds an All American quality that is slightly vacant due to Schwarzenegger’s Austrian roots. Thankfully, he has many scenes to run down streets and spit out catchy one liners, not too dissimilar to the ones in Terminator, Total Recall and the rest of his filmography. Examples include “Put that cookie down, NOW!” and “You picked the wrong day!” to a charging reindeer.

Phil Hartman delivers his irritatingly best as the annoying neighbour who sits in as the proxy father and husband. Sinbad is even slightly endearing as the sidekick/shopping antagonist to Howard in his search.

Culminating in a grand holiday parade that turns into a live action Turbo Man scene, all is redeemed and the world is in place as it should be. Produced by the 1492 team that brought Stepmom and the first few Harry Potters, Jingle All the Way speaks to the millions of children who have wished for that illusive, must have Christmas item, and for those millions of parents who have had to brave the crowds to buy said desirable items. Brian Levant’s direction and Randy Kornfield’s story may be slightly formulaic, but has some life from the eccentric supporting performances from Sinbad and Hartman and their rambling quips that feature throughout the film.

Jingle All the Way was released theatrically in Australia on November 21, 1996 through 20th Century Fox.

And just for something extra, here is a recut thriller trailer.