The concept of good and evil can sometimes be seen as very black and white. In most cases, however, the line is much more blurred and there are surrounding shades of grey. Good and evil are rudimentary opposites that can inhabit a person simultaneously. Notions of dualism are dissected to brilliant perfection in Darren Aronofsky’s latest masterpiece, set in the world of a New York Ballet Company in Black Swan.

Nina Sayers (Natalie Portman) is a dedicated dancer. She trains for hours on end, and is a perfectionist. After auditions for the company’s new production of Swan Lake, Nina is announced as the Swan Queen, a role consisting of both a virginal White Swan, and a dark, seducing Black Swan. With pressures mounting, Nina becomes involved with the ballet company director Thomas Leroy (Vincent Cassel) and strikes up a strange relationship with fellow dancer Lily (Mila Kunis). As the film progresses, Nina suffers a meltdown, unable to find the equilibrium between the two roles. Fantasy and reality are combined and the effect can only be described as transplendent.

Most recently, I viewed Michael Powell’s The Red Shoes (1942) and Herbert Ross’s The Turning Point (1977). Both are classic ballet films that have stood the test of time, still being as potent as when first released. The films surround the idea of creative sacrifice. Choice between career and a person life is just that in these two films: a choice. Both are not possible, and as seen in The Turning Point, regrets occur no matter what the choice. Black Swan similarly displays the taxing effect that ballet has over a personal life. As a dancer, Nina is a perfectionist and mainly keeps to herself, having only her mother as a friend (ring a bell Anthony Perkins fans?) When Nina finally gets closer to Lily, disaster eventually ensues and her work suffers. Nina therefore continues to swim alone in a sea of her own attempts at perfection, and the results are fascinating to watch. 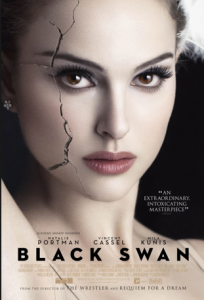 Natalie Portman is this year’s best actress. Winning almost every award possible so far, (with the Oscar just feet within her grasp) her performance will go down in history, played with such conviction, talent and vulnerability. The character of Nina is really put to test throughout the film. She is a mess psychologically and decreasingly lean physically. Her yearning is great, and while the audience roots for her from the start, there is foreseeable doubt that she is up for the endurance of such a strenuous role. Both Portman and Nina’s dedication to their respective roles sees creative sacrifice played out for all it’s worth.

Nina’s mother Erica is played by the brilliant Barbara Hershey. This seems to be the year of the disturbed mother in film. Hershey’s Erica is no exception, and thankfully she is played with a multitude of layers, rather than as a very familiar cliché. Congratulations are in order for Ms Hershey, who just received a Best Supporting Actress nomination from BAFTA, one of the only nominations received solely for her performance.


Mila Kunis knocks the ball right out of the park with her performance as the driven, talented Lily. Both Portman and Kunis had extensive dance training for their roles, and it pays off in droves. Both are beyond convincing as members of a New York ballet company. Playing a character that seems to resemble the Black Swan, Kunis seduces all around her, especially Thomas and Nina into her spell. Already a recipient of a Golden Globe and Screen Actors Guild nomination, expect to see Kunis sitting at the Kodak theatre with an Oscar nomination come February.

Vincent Cassel provides the antagonist with ease, revealing a disturbing man without real concern of the insanity he creates in his dancers. Winona Ryder also gets a chance to play a fading star, with some equally disturbing horror hospital themes.

Twin, doubles and doppelganger imagery is brought to life, by Aronofsky in a hybrid of psychological thriller, horror, melodrama and dance. A wonderful story was created by Andres Heinz along with an equally matched original screenplay written by Mark Heyman, John J. McLaughlin and Heinz, all three whom have very little film credits to date. Oscar worthy direction from Aronofsky, sublime cinematography by Matthew Libatique, a terrific score from Clint Mansell, along with astounding performances see Black Swan as my pic of this awards season and an instant classic. The film stayed with me for weeks, and it took a couple of hours to come back down to earth after viewing this work of genius. You must see this film!