The lyrics “You gotta get a gimmick, if you want to get ahead” by Stephen Sondheim for the Broadway musical Gypsy have never been more appropriate when discussing an entertainer. In the case of Spine Tingler! this entertainer is the celebrated and beloved film director, William Castle.

A legendary showman, Castle knew how to appeal to audiences with his horror films of the 50s and 60s. From an early start in Hollywood, working with Columbia pictures, Castle quickly learnt everything there was to know about show business. It was this knowledge that would help propel him into the mainstream.

After 15 years of working as a director across varied genres such as noir, melodrama and westerns, Castle moved into horror films. Even though horror films generate a degree of instant popularity, Castle, driven by the fear of an empty audience, wanted to give the audience something else. 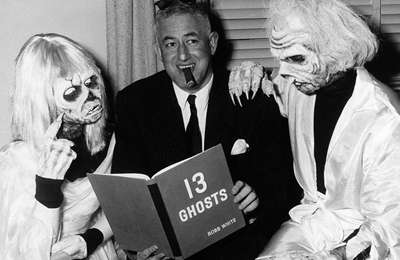 Inspired by circus showmen such as P.T. Barnum, Castle brought an array of gimmicks which would enhance the cinema going experience for films such as House on Haunted Hill (1959), The Tingler (1959), 13 Ghosts (1960), Homicidal (1961), Mr. Sardonicus (1962) and Strait-Jacket (1964). Renowned as a B-grade film director, it was these gimmicks that would generate the publicity rather than the mediocre films themselves.

Castle’s desire to appeal to an audience and constant innovation in cinema technologies can be highly related to the state of cinema today. 3D technology has not only expanded motion picture viewing, but now boasts 3D soccer matches, 3D home television and who knows what next. The constant attempt to impress and dazzle the audience is something that we see in Castle’s story, and a force that will live on through the ages of cinema.

Spine Tingler! puts the cinema of attractions on perfect display, and Castle’s use of audience interactivity reminds us of yesteryear, and the state we’re in today. And what we know today, is that we don’t have gimmicks such as Emergo (ghosts and skeletons leave the screen and roam around the theatre, hovering above the audience), Percepto (scattered electrified/buzzing seats where immediate relief was sought by screaming), Fright Break (a chance you have to leave the theatre and get your money back, but first you must go to the Coward’s Corner) and the Punishment Poll (where the audiences chooses the ending of a film and has the power to punish).

Often referred to as “the poor man’s Alfred Hitchcock”, Castle was an auteur of his own class. He knew how to appeal to his audiences and was synonymous as a brand name, much similar to Hitchcock. It’s interesting to note that Castle’s Homicidal (which was a gender bending thriller, very similar to Hitchcock’s Psycho (1961)) landed on TIME magazine’s Best 10 films of the year. While his films warranted criticism, Castle went onto to produce one of Hollywood’s finest horror films ever, Rosemary’s Baby (1968).

Accompanying Spine Tingler! are interviews with his family, friends and noted film historians and prolific film directors such as Leonard Maltin, Paul Sammon, John Waters, Joe Dante and Roger Corman. Spine Tingler! is a love letter to the true showman, and one of the most endearing men in show business, William Castle.

Spine Tingler! is showing at the Melbourne International Film Festival on Saturday 24th July at 9.30pm and Tuesday 27th July at 7pm.

Written By
James Madden
More from James Madden
Celebrity is just obscurity biding its time. These words were spoken by...
Read More